Coastline is a string ensemble comprised of BC's top young musicians ranging from ages 14-21, coached and mentored by internationally acclaimed fiddler, Ivonne Hernandez. This award-winning band has already been making a name for themselves since their inception in January, 2013.

With fiddles, cellos, guitars and piano, the group of talented teens play a diverse and exciting repertoire. With intricate arrangements of traditional, original, and contemporary fiddle tunes from around the world, Coastline is pushing boundaries and always having a great time whenever they play.

Individually, the members of Coastline have won many awards and competitions, and as a group, their talents blend to form a strong, united sound that is a force to be reckoned with. After being together for only a few months, they won the Large Fiddle Ensemble award at the Greater Victoria Performing Arts Festival. They have since gone on to perform at many different festivals and venues across Western Canada and internationally, including the Aberdeen International Youth Festival, Blas Festival in LImerick, Ireland, Victoria International Highland Games & Celtic Festival, Victoria's Tartan Day, and Car Free Day to name a few. Coastline was the featured performer at the Victoria Folk Club, Sidney Celtic Vespers and with both the Gettin Higher Choir and SingYourJoy Youth Chorus at 2 sold out performances with each choir. Coastline has also performed with the Calgary Fiddlers on a short western Canada tour, and opened for such notable acts as the award winning band The Fretless, Scottish fiddle/cello phenom duo Alasdair Fraser and Natalie Haas, Quebec phenoms De Temps Antan, and American celtic fiddler Katie McNally Trio, among others.

With a keen desire to perform, share their music and travel, Coastline has had a busy couple of years. They released their debut self titled album to rave reviews and 2 Canadian Folk Music Award nominations, and represented Canada at the Aberdeen International Youth Festival in Scotland in July 2015. This year has been an exciting and busy one for this team of young musicians. Fresh off a summer tour to Ireland, as well as feature performances with Natalie MacMaster and the Leahy family coming up, as well as many more exciting performances, 2018/2019 season for Coastline is an exciting one! Check out these great young musicians and prepare to tap your toes and clap your hands to our Coastline!

Some people are born to play music. Ivonne is one of those people. As a child, Ivonne was invited to join Daniel Lapp’s BC Fiddle Orchestra and played on the Orchestra’s Fiddleharmonic CD and before 60,000 at a Commonwealth Games. At 13, Ivonne was the youngest member of the Greater Victoria Youth Orchestra and became a judge at the Merritt Old Time Fiddle Competition after winning two years in a row, as a 15 year old. Ivonne is a 5 time Grand North American Fiddle Champion, has performed with Mark O'Connor, Alan Jackson, Gloria Estefan, Jann Arden, U2's the Edge, Natalie MacMaster, Earth Wind and Fire, Steve Winwood, Burt Bacharach, Juan Louis Guerra, Rosa Pasos, Ben Hepner and legendary film composer Howard Shore.

The young musician has been featured on television and radio, at folk music and fiddle festivals around the world, and played for the Governor General of Canada. Her recording catalog consists of over 7 of her own albums and countless other albums featuring Ivonne, as she is a sought after session player and lends her talents on many critically acclaimed recordings and film scores from artists in both Canada and the US.

With her band, Ivonne has been performing many educational and entertaining school shows across Canada and the US to high acclaim. She has toured and taught all over North America, the Caribbean, the UK and Ireland and Europe, and if that wasn't enough, Ivonne was offered a scholarship to attend Berklee College of Music and graduated in 3 years at the top of her class with a dual major in Violin Performance and Music Business & Management. Ivonne's former band The Fretless, has toured across North America and Europe with their unique sound, arrangements and prolific playing. Their 2012 and 2014 critically acclaimed albums 'Waterbound' and 'The Fretless' has been garnering attention and awards including the 2012 & 2014 Western Canadian Music Awards for Instrumental Album of the Year and a 2012 and 2014 Canadian Folk Music Award for Ensemble of the Year and 2012 Group of the Year. Their last album 'Birds Nest' released in 2016, won Ivonne a 2017 Juno award for Instrumental Album of the Year!

Ivonne Hernandez has mastered Canada’s traditional fiddle music. She transforms her folk music roots into an exciting and dynamic new form and is thrilled to be working with Coastline and bringing her ideas and challenging these wonderful young musicians. The next generation of fiddling! 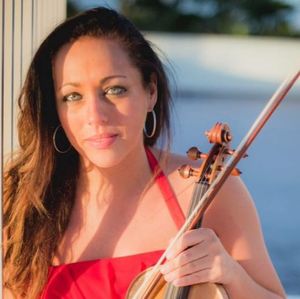